Finishing up our training in Denver!

We finished our training in Denver a few days ago.  It was a ton of fun!  As I stated in a previous post, there are two parts to our training for those of us spending the winter at the South Pole.  The first part was mostly team building and I wrote a little about that here: Post Team Building Thoughts.  The second part of my training was Fire training at the City of Aurora Public Training Center (CAPSTC). (Sorry I couldn't find a better link!)

Fire training is mostly learning about emergency techniques to fight fires or at least mitigate the loss due to fires at the South Pole.  The great thing about the trainers was that they were so willing to work with us and customize the training to meet our needs.  The first day we got fitted for some bunker gear for the week, and spent a little time getting used to it.  The rest of the week we had classes about every thing from fire behavior to search and rescue.  After the classes, we would go out in the after noon and actually put out fires using equipment similar to what we will actually have at the South Pole. 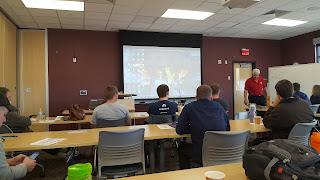 This was a class on fire behavior so we have a better idea of how to put fires out. 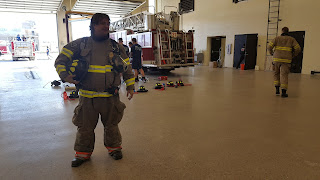 This is a picture of me in the bunker gear.

As part of our training we actually went into the training buildings in full SCBA gear (breathing equipment) where we put out some of fires.  At one point they had a fire going in a room where we got to experience temperatures of around 600F to 700F in our gear.  It was a very controlled situation, but was still very eye opening. We had a wonderful set of instructors who helped us prepare for terrible situations that I honestly hope I never have to face.  Having been through this limited amount of training, I have a much greater respect for the firefighters out there.  The trainers never pushed us too far out of our comfort zones, but it was close enough that I am happy there are men and women out there willing to work in such a dangerous job day in and day out.  I can't imagine how taxing that must be physically and emotionally.  So, thank you to all those firefighters out there! 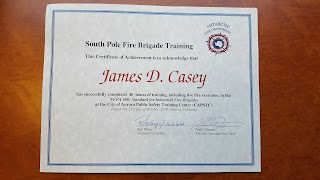 After all of the training was done, we had a small celebration and some cake, and  I even got a certificate!

After we get to pole, we are going to be divided up into groups.  Not everyone will be directly involved in the fire brigade, but all of us will have our part. After things settle down, I will post more about the other responsibilities and groups that will be operating down there to keep everyone safe.