Astronomy on a cold winter night!

I have been motivated a little more lately to get out and do some astronomy.  I visited the VBAS observatory/planetarium and renewed my membership last weekend.  I was a member before grad school 5 or 6 years ago, and haven't actually been up there very much since then.  I also pulled out my telescope a couple times over the past week and did some viewing.  Since I was living in Atlanta during grad school,  I had a hard time getting out where it was dark enough to see anything, so I am a little rusty.  My telescope is a modest 10" Zhumell dobsonian.  I also have a small set of Celestron lenses and filters that I use.

Tonight I was actually to observe some pretty interesting objects in the sky.  For those who are unaware, there was a French astronomer named Messier who was interested in finding comets.  He compiled a list of objects in the night sky that could be mistaken for comets so he wouldn't waste his time on them.  This list has grown to around 110 objects that many amateur astronomers try to observe for fun.  The list contains nebulae, galaxies, and various other objects that are fun to observe because they are more than just points of light such as stars but can be seen by a skilled observer in dark locations.

The list of objects I observed tonight include Jupiter and the Galilean moons, several constellations, and 11 of the Messier objects:

I also spent a little time on the moon.  I even took a picture using my cell phone (through the telescope).  Unfortunately, I am not equipped for astrophotography... yet! 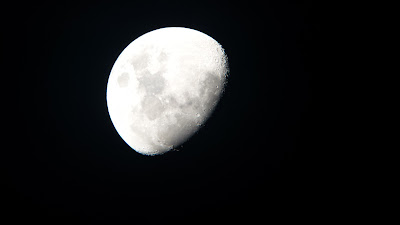 Posted by Unknown at 1:41 AM No comments:

Email ThisBlogThis!Share to TwitterShare to FacebookShare to Pinterest
Labels: astronomy

I am a strong proponent of Tor and Tails.  I have used PGP (via GnuPG) off and on for years.  For those unaware, these technologies are designed to protect anonymity and/or privacy on the internet.  Each may get its own blog post in the future.  So it feels a little odd starting a new website with the purpose of getting all my professional and even personal information out into the eye of the public.

Personally, I do still try to browse anonymously using those technologies and a few others (which I will also post about in the future).  I even run a Tor relay.  I think that more people should be involved with the Tor project.  So, I suppose the question is, "How do I reconcile my desire to remain somewhat anonymous with posting so much personal information?"  I have been thinking, and at least in some respects it comes down to my ability to choose.  I (mostly) choose carefully what gets posted on my website.  I choose what I post on my blog and on social media.  I have actually tried to be careful about what goes out to the interwebs about myself.  I think it is perfectly fair for me to let people see certain aspects of my life without showing them every reddit post I read or every academic article I look at.

One day we could have this same level of control over all of our data.  We may be able to better choose what people see about our activities online.  I think this is still a challenge waiting to be solved, and I am interested to see how it all plays out over the next several years!
Posted by Unknown at 2:06 PM No comments:

Email ThisBlogThis!Share to TwitterShare to FacebookShare to Pinterest
Labels: technology

The LIGO collaboration announced today the detection of the first gravitational waves from the merger of two black holes.  I originally started grad school wanting to work on gravitational research before joining the IceCube collaboration to do research on neutrinos and particle astrophysics, so I am especially excited to see the progress being made in gravitational astrophysics.  The work being done by LIGO will provide a new way of exploring the universe through the observation of gravitational waves.  Their announcement today is just the beginning of the work to come!
Posted by Unknown at 8:18 PM No comments: