It's getting dark at the South Pole!

The past couple of weeks at the South Pole have been really great. Our detector (The IceCube Neutrino Observatory) has been fairly stable with only a few small issues that Martin and I have had to deal with.  The most "exciting" event happened last week on early Wednesday morning when the wind picked up. It turns out that the wind was blowing some cold air into the ICL (IceCube Lab) and was causing the building temp to drop below our lower limits.  Martin and I ended up having to wake up one of the maintenance guys on site to help figure out the problem and get it all fixed again.  Thankfully, all we had to do was close a vent and then the temperatures climbed back up to a safe level.  Additionally, since we have remote access to the equipment in the building, we didn't even have to walk out in the middle of the night.  We did everything on the station which was very nice, especially at 3 or 4 in the morning!

Cold temperature warnings aside, our weather here has been all over the place.  The temperatures last week got as high as -45F.  That is far warmer than I would have expected, considering that I just heard tonight we might hit -90F by this weekend! The funny thing about that is that I am getting used to the colder temperatures here.  I actually went out for a few minutes a few nights ago onto one of the decks wearing a t-shirt, shorts, and flip-flops.  In fairness, I didn't stay out long, only a minute or two, but it is kinda funny to me that I was even able to get out for that long!  As I have mentioned in a previous posts, we had to cover all of the windows on station to prevent light from the station from interfering with some experiments here.  If we want to see what it looks like outside, we actually have to go outside.  So the other night I went out to see how things were looking. It was actually pretty amazing. I almost got a little giddy, staring up and the first few stars to be visible.  I am still so excited to be down here right now as it is getting darker and the long winter night is starting. The sun set here a few weeks ago, but it is still not completely dark. It has gotten dark enough, though, that now we are starting to see more and more stars.  In fact, last night I went out and saw the very first aurora of my life!  It was very faint and hard to see, but even still it was amazing.  I am really looking forward to the days ahead as it gets even darker and there are more stars and aurora visible.

Other than that, I have been staying busy as usually with my winter projects.  I have been teaching a ham radio class here that seems to be going well, though at times a little slower than I am used to. Normally I would teach this class in roughly 6 hours strait,  but I have spread it out over a couple of months down here.  If everything works out, and I can get things organized with the ARRL, we should be able to offer the ham radio license exams sometime next month!  I have also been doing language studies every day.  I finished going back through Spanish on Duolingo, and soon I will be trying to supplement with more external resources.  In the mean time I am still practicing French and thinking about adding Russian soon. I have been practicing the violin a few times a week, and I am enjoying that. The only area where I am a little behind is reading, but I have been making progress, just not as much as I would like.  Thankfully, I still have some time, and I am confident that it will all work out in the end.

I know it probably sounds a little cheesy, and you may be getting tired of me saying it, but I am still so happy to be here right now. I have a great job facilitating scientific research on one of the most amazing astrophysical experiments in the world.  I am about to see stars and auroras from an amazing location that few people will ever visit, much less at night. I am living and working with an amazing group of people here, and I am truly enjoying this adventure.

As it gets a little darker, I hope to add more pictures, particularly of the stars and auroras. Until then, here are a couple I took the other day.  These are probably not the greatest pictures, but hopefully, I can get some more of Martin's amazing photography soon and get those posted. 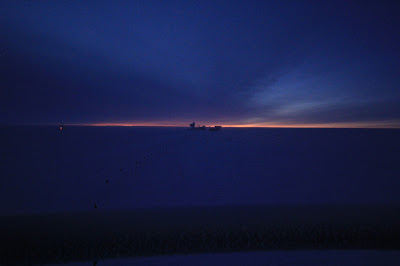 The South Pole Telescope (SPT), Bicep, and Keck at dusk. 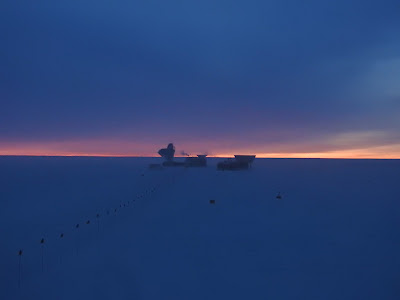 A zoomed in view of SPT, Bicep, and Keck!
Posted by Unknown at 12:13 AM No comments: