Working outside at the South Pole

The past couple of weeks have been somewhat active on station, and there will be more updates about some of that activity in the near future, but I wanted to give an update about some work we did last week first. Four times a year, the IceCube winterovers go outside and measure the snow accumulation on the detector.  The reason for this is that the IceCube Neutrino Observatory has a surface component called IceTop which is primarily used for cosmic ray studies.  IceTop was originally very close to the surface, but over time, snow has built up on the tanks that hold the detector equipment, and in order to better understand the IceTop detector, we have to go out to each pair of tanks and measure the height of the snow build up. There are just over 80 tank pairs. So two days last week, we went out and took IceTop measurements.

Overall, it isn't too bad a gig, but the problem is that it is getting colder outside now that we are getting closer to winter.  This is the second time Martin and I have done it since we got here in November; the first time we did it was in December, when it was much warmer.  This time around we actually had a little help from the RAs on site, Doug and Adam.  On Wednesday we went out and it was around -60F with a wind chill of -100F. This time around, since there were four of us, we did things a little different.  We split up into two groups.  Doug and I went out on foot, and Adam and Martin took the LMC (basically think of a very slow snow tractor).  Doug and I would do a handful of tanks then meet up with Adam and Martin to warm up in the LMC and then we would split up again. Now, keep in mind, our detector is huge!  The entire detector is a cubic kilometer with the detectors being spaced around 125m on the surface which means there was quite a bit of walking between tanks... at temperatures that feel like -100F.  Thankfully, on Wednesday, we were able to finish a little over half the detector by lunch.  After some discussion, we decided to do the second half of the detector on Thursday morning. 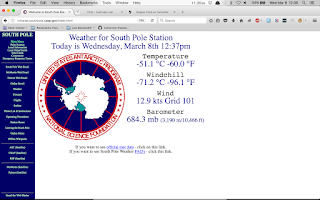 The weather conditions on Wednesday, our first day out.

As it turns out, walking around outside for a few hours with a wind chill of nearly -100F really does wear you out... especially if you stayed up too late the night before working on other projects.  So, I spent most of the rest of the afternoon napping. I did wake up for dinner for a bit, but after that I was still a little drained, and napped some more.  Finally, sometime during the evening, I woke up in time to get some late night Internet'ing in.  A little after midnight, things got interesting.  A fire alarm went off in one of the external buildings and all the emergency response teams, which is basically everyone on station at this point, jumped into action.  Thankfully it turned out to be a false alarm, but it was definitely an exciting end to the day. Thankfully, I was already awake, so it didn't bother me too much, and shortly afterwards I was able to go to bed and get a little more sleep before our next outdoor adventure on Thursday.

On Thursday, things were a little colder, but there was a little less wind so it didn't feel quite as bad.  This time, Doug and I got to ride around in the LMC while Martin and Adam walked from station to station.  Trust me when I say that the LMC is much warmer and far more comfortable than walking! However, splitting up the work like we did made the measurements go much faster, of course at the expense of having to walk around in some pretty extreme temperatures!  But, honestly, our ECW (extreme cold weather gear) works fairly well.  Really, only my hands felt cold while we were out.  I really didn't feel that cold otherwise, until we got inside.  For some reason being back inside made me realize how cold I was starting to get!  Overall, it wasn't that bad.  We were able to get out and do some walking in a beautiful and albeit extremely harsh, cold, and isolated part of the world. 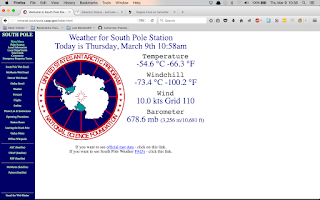 The weather conditions on Thursday, our second day out

Beyond that, things have been going well. I have spent some time working on my personal winter projects.  I have been reading a ton, and I am still working on Spanish and French studies.  I have also been practicing the violin. I am not so disciplined that I get to everything I want to every day... hence, the delayed blog post, but overall, I have made some pretty good progress, and I am optimistic about the coming months.  The sun is getting closer and closer to the horizon, so in a couple short weeks it should start getting dark here, and I have a feeling that will be an amazing and beautiful experience all its own!