There are basically two seasons at the South Pole, summer and winter. Summer lasts about three and a half months, and is at least a little bit warmer. The sun stays up 24 hours and doesn't set.  The temperature this season reached a high of just under 1F though it was mostly around -20F. During the summer season we have around 150 people on the station at any given time.  Most of these people are here to do upgrades and fix problems on the station or with their experiments so that they are ready for the winter.  Throughout summer, there are regular flights into and out of Pole.  Many people come in or out.  Supplies are brought in. There are even some tourists.  After the station closes for winter, that all changes.  The winter gets much colder.  The lowest temperature can go below -100F.  Sometime in March, the sun will set over the course of a couple weeks.  Then finally in April it will start to get dark giving 24 hours of night.

Yesterday was an exciting time for those of us spending the winter here at the South Pole.  We closed the station for winter.  This means that the last of the summer support people flew out, and there are no more big flights in or out of the station.  There will be a couple of smaller planes that will stop here to get fuel on their way across the continent to get home, but even those will stop coming in soon.  We are effectively on our own at this point. There are 46 people that will be spending the next eight and a half months living and working together at the Amundsen-Scott South Pole Station.  It is a very exciting experience for all of us. There have only been around 1,500 people to spend the winter at the South Pole. Interestingly, more people have summitted Everest than have spent the winter here.

The closing of the station marks a transition for us.  This is the point many of us have been looking forward to for the past several months.  It is the beginning of an amazing adventure that few will ever experience. The station is much quieter now.  Just about everyone who is wintering knows everyone else.  The sun will be setting soon, and it will bring with it one of the most beautiful night skies in one of the most extreme and isolated places in the world.  As an astrophysicist this is especially appealing to me. Not only am I working on what I feel is one of the greatest astrophysics experiments in the world, the IceCube Neutrino Observatory, I am also going to be able to step outside and see the stars and aurora from a place very few people ever set foot. I have heard that some artists believe science strips away some of the beauty of nature, but in my experience, the opposite is true.  When I see the stars, I am reminded of the complex processes that make them work, the vast sizes of the stars and galaxies, and the huge distances between them. To be able to experience that awe and wonder at such a unique place as this... I can't even fathom how amazing it is going to be!

There will be difficulties this winter, I am sure. Living with the same 45 other people in such a limited space will almost definitely cause at least some minor conflict, but we have an amazing group this year, and I am confident that we can work through any issues we run into. I think each and every one of us is looking forward to the adventure ahead in their own way and for their own reasons.  Now that station has closed, I am looking forward to the next major milestone, sunset. 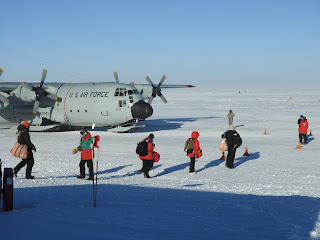 The last of the summer crew loading the last Herc of the season! 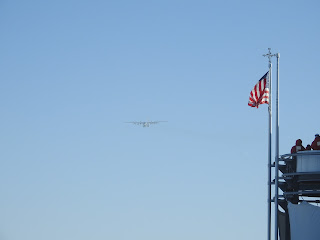 The last plane circled and did a fly-by.  Several winterovers gathered on the station observation deck to watch! 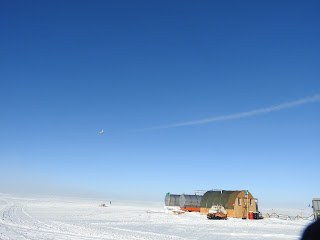 The last plane departing, leaving us here alone for the long Antarctic winter!
Posted by Unknown at 8:10 PM

James, we can hear the excitement in your words. Your appreciation of the here and now is exemplary. We are proud of and for you; take care of yourself and we look forward to reading future updates.

Thanks for this blog. Just getting to follow along is the closest I will get.