The past couple of weeks have been far busier than expected.  We had a new group of IceCube and ARA people come in to do work on the detector, and it turns out there was a ton to get done.  I recently started working on a more science post about IceCube and ARA, but I haven't had the time to get it cleaned up.  I hope I can get it posted in the next few days so that people have a better idea of the work and science being done down here.  Until then, I will try my best to explain some of what we were working on.

ARA is another neutrino detector that is in the process of being constructed down here.  It has many connections with IceCube, which means that it is also an experiment that I am also responsible for.  The big difference is that it looks for much higher energy particles than IceCube, so it is much more spread out.  One of the things I did last week was to pull around 3-5km of fiber optical cable from a couple of the existing ARA stations to the new station sites to be built next season.  At first, it was kind of fun getting out and working.   The weather was reasonably nice and warm, around -15F to -20F.  The sun was shining, and it was an opportunity to hang out with some fun and interesting people.  I will admit, though, by the time we were done, I was worn out!  We had to unroll this huge cable of wire as it is being pulled behind a forklift.  It doesn't sound quite so bad, but the spool was heavy and we had to spin out so the fiber didn't get damaged.  The other big problem is that we are at an altitude of almost 10,000ft walking through snow.  Thankfully, the snow wasn't too loose and was a least a little packed down.  But lets be honest, no matter how used to the cold I seem to have gotten over the past few months here, after spending a few hours at -20F.... I was feeling cold!  Actually, it was only my fingers, toes, and face.  That being said, I did get an epic ice beard going.  That might have made it all worth it!

In addition to that, we actually got a request to BREAK the IceCube detector!?!  Well, not really.  In reality we performed a stress test of the new software that was recently installed on site.  And how did we do this fun little experiment?  Back when the detector was being constructed, several of the sensors were built with LEDs, called flashers, that we use for calibration work.  Normally, we can turn on these flashers and use them to get a better idea of how the detector is functioning or even changing over time.  In fact we performed over 28 hours of flasher work this season to be used for calibration.  This time, however, we used them to crash everything!  We started by turning on one set of flashers at a time.  After a minute or so, another set of flashers was turned on... then another... and another.  Until finally, there were so many flashers running that the detector couldn't keep up with all the data and everything stopped working!  The sensors in our detector are so sensitive to light, that just flashing a few hundred LEDs can cause the system to crash.  Thankfully, this doesn't do permanent damage to the detector.  In fact, the entire plan was to get so many flashers running that the detector was forced to crash to get a better idea of the performance of the detector under some extreme conditions.  Overall, it actually turned out to be a bit of fun.  Many IceCubers up north got onto the chat and monitoring systems to watch how everything went down.  We had a small group in the lab here at the pole, and the only thing missing was the popcorn!

Overall, things are going well here.  Obviously, I am a little behind on posts.  I have a few nice blog posts planned for the near future, if I can ever get them all typed up.   I am going to give some background on the science here, and I even want to talk about some of the "difficulties" of living at the South Pole.  On a little bit of a side note, I have also been playing on the ham radio down here.   I am going try to get some information about that in a post here soon as well.  It is really fun being able to communicate to the North using nothing be radio waves from the South Pole all way up to the United States!  If there is anything else that people are interested in, I am hoping I can try to cover it soon.  After the station closes in a few weeks,  things should actually really finally slow down here! 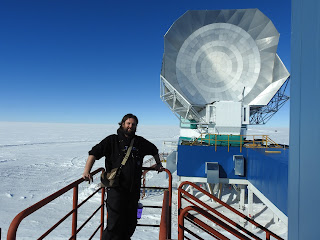 At some point over the past couple of weeks, I actually made it out to another experiment, the South Pole Telescope, for a tour. 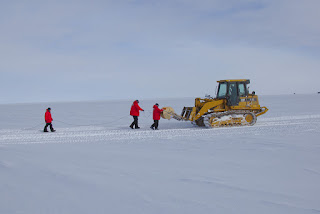 We took turns unrolling the fiber as we walked a few km behind a forklift.  It was actually way more work than it looks! 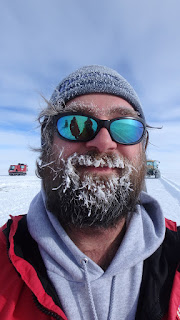 In the process of pulling cable, I actually developed this epic ice beard!  Yay science!
Posted by Unknown at 10:16 PM

I have a question about the DOMs. Once they're down in the drill hole, is the hole filled in with water so they're frozen in place? Or is the drill hole left open? (Seems like the ice would gradually move in and compress everything... maybe that's the third possibility...

The drilling process actually leaves most of the water in place and just melts it. After the DOMs are lowered into place, the ice freezes around them. The DOMs actually have a very thick outer glass sphere designed to take the pressure of the ice as it refreezes. Suffice it to say that when the DOMs are in place they are stuck there!