Getting Settled In at the South Pole!

I have spent the past couple of weeks getting settled in here.  Mostly things have been fairly good.  The one problem I have had to deal with was a small cold.  Finally, even that seems to be pretty much gone.  Since I have only been here for a couple of weeks, there is still a ton of training and acclimation going on.  Mostly, I am getting pretty comfortable with the altitude.  The dry air isn't too bad, thanks to lotion.  The people here are great.  I feel very fortunate to be able to be here doing what I am doing.

As for training, I am getting a bit of a refresher on the work I will be doing for the next year. I haven't talked to much about the experiment I am working on, but that is mostly because it will take several posts to do it justice.  For now, I will give a brief overview and describe some of my role in it right now. I am basically making sure the IceCube Neutrino Observatory continues to run and collect data and performing any routine calibration tasks.  The experiment is designed to detect tiny particles called neutrinos that every so often interact with the molecules in the ice around the South Pole. Many people don't realize that the area here is covered with roughly 3km of ice.  We have over 5000 very sensitive light detectors running from 1.5km to 2.5km deep that have been placed on 86 cables lowered into small holes that were melted into the ice.  Of course the holes are all frozen back over now, so we have these detectors connected to wires that run into the IceCube Lab (or ICL).  In the ICL are several servers that process all the information from these light detectors.  It is my responsibility, along with my colleague Martin, to keep all of the servers running and fix any problems that arise. This could be anything from the network infrastructure including switches, cables, and firewalls to the custom hardware that collects the data from the light detectors in the ice.  It is a big responsibility!  Thankfully, most of the training we have been doing has been fairly thorough.  We also have some support up North if things get really wonky, but most of the problems we should be able to deal with on our own without too much help from others.

The training the past few days has mostly been on the networking side of things.  This includes the layout of the servers, how the switches are configured, and the firewalls. Next week, we will be going through some of the custom scientific hardware that actually collects the data on the surface (as opposed to the hardware frozen in the ice).  Suffice it to say that there is a lot to learn on a project as big and complex as IceCube.

As promised, I would also like to show some pictures!  I am putting a few here, but check out the link on the sidebar to see the full album. 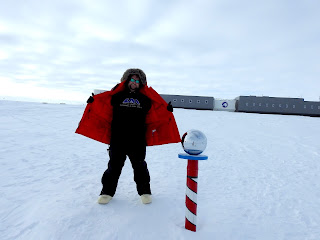 I put together a couple videos for my undergraduate university UAH.  So I took a pic at the ceremonial South Pole in my UAH sweat shirt. 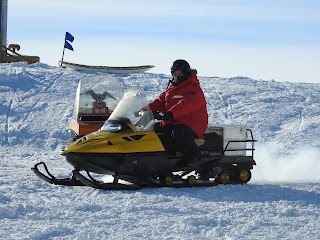 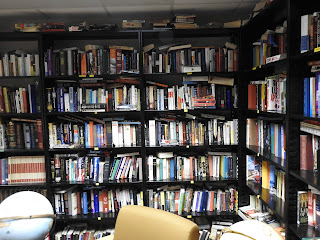 A pic from inside our library.  There are tons of books on station.  There are more books on the other side of that wall and then a large wall of books in one of the lounges. 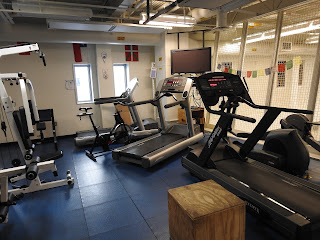 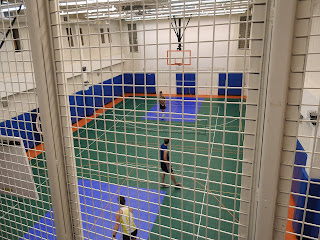 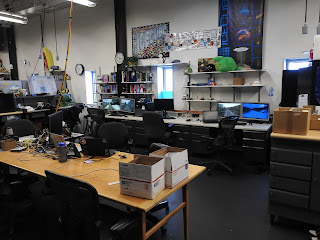 This is where we do most of our work. 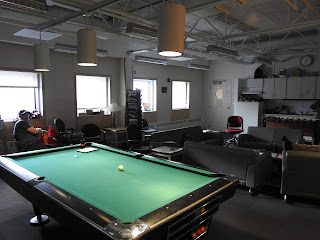 This is one of our lounges. 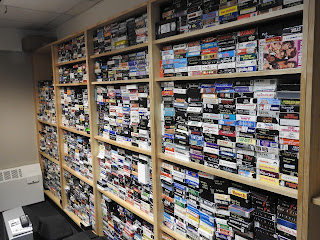 There are lots of movies here.  This is only one small section for the VHS tapes.  There are also tons of DVDs 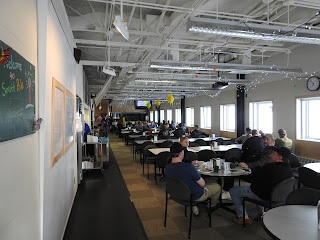 The galley.  This is where we eat. 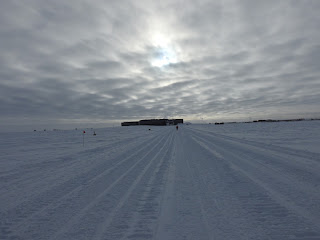 Just out for a casual stroll at the bottom of the Earth.
Posted by Unknown at 2:01 AM